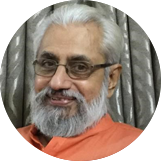 Swamiji is a traditional and contemporary teacher of Vedanta and a founder of Aarsha Vidya Foundation, a trust dedicated to Vedic wisdom teachings.

For more than three decades, he has impacted the lives of different groups of people– students of Vedanta, seekers, youth, corporates, professionals in India and abroad. With a compassionate heart and deep insights into the workings of the human mind, he speaks as authoritatively on political conditions, the latest technological advances as he does on siddhi grantha-s of Vedanta.

An active practitioner of martial arts (Karate, Judo and Tai Chi Chuan), he has been associated with many corporates on strategy building and on different programmes for educational institutions.

Acknowledged as a ‘significant Mahatma’ by his own guru Pujya Swami Dayananda Saraswati ji, Swami Brahmavidananda studied the Prasthanatrayi (Gita, Upanishads and Brahmasutras) in Sandeepany from 1976-1978 also inspired by Swami Chinmayananda ji. He spent an austere life in Rishikesh for seven years studying advanced Vedanta texts with Swami Tarananda Giri ji. and Swami Harihara Teertha ji. He took to Vedanta full time post his career as an engineer. To know more about classes, click the link below